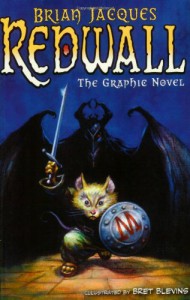 I got this for $1 at the Metro Library Book Sale. I had no idea they ever made a graphic novel of Redwall, so I was excited. But given how thin the book was I had my worries. And it turned out to be what I feared. They condensed this far too much. Numerous characters were glossed over or left out. They didn't even mention otters, who are major creatures in Mossflower. Moles, especially Foremole, was only seen on one page. Some dialogue was hard to understand, and some panels were convoluted. This really needed to be at least 50 pages longer to fully flesh out any Redwall tale. We even cut the ending rather short so you didn't even have time to fully grieve for those lost in the final battle. Just a neat bow on things.